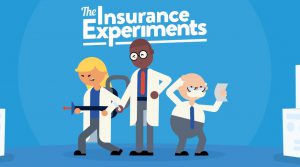 In the last few weeks, the ABI (Association of British Insurers) has launched a project which doesn’t look like it has anything much to do with us. That’s deliberate; there’s no ABI branding and not even a hint of a logo. Instead of carefully considered words about the importance of the insurance industry, we have some two dimensional science characters and props including pigeons, gnomes and toxic goo.

Insurance offers security and peace of mind to millions of people – often coming into play at times in their lives when something awful has happened. Having the right cover at those times is crucial but buying insurance is generally regarded as a chore. Many people head to a comparison website and spend as little time as possible picking one of the lowest priced policies from a brand they recognise. The danger is that when they need to make a claim, they find out they haven’t bought the level of cover they would have wanted.

The focus of our latest campaign is an educational one, and it’s being driven by the many CEOs who sit on both our Board and our general insurance committees. We want to encourage consumers to make conscious decisions about the insurance they’re buying because that makes it more likely they’ll have the cover they need if they come to make a claim. But most people aren’t that interested in learning about insurance. If we’re serious about helping consumers understand concepts such as excesses, rebuild costs and what lies behind the cost of their premium we need to take our explanation to them in a way which will grab their attention.

Our animations have recently started appearing in Facebook feeds. Lasting barely 20 seconds each, they address some of the core concepts we think will improve consumer understanding of general insurance, with matching infographics providing further information. Given that we’ll likely be competing for attention with comedy cat videos and lists of 59 things you never knew about avocado, this project had to look different to usual ABI materials. The animations feature a core cast of scientist characters finding out about insurance while working in the lab and relaxing at home. Their mission? To teach people about insurance without them even realising. They’re The Insurance Experiments – and they’re going undercover.