The first of today’s guest blogs comes from The Money Charity, a national financial capability charity providing financial education, information and advice to young people & adults throughout the UK.

Sometimes it seems that whenever there’s an issue for young people, there is a call for a change to the national curriculum. Just recently, studies found that young people were the fastest growing group falling victim to financial scams. On the radio that morning, what was the call? Put it on the curriculum!

Those of us who work delivering financial education in schools can offer a cautionary tale.

The Money Charity is one of the largest organisations helping schools across England, Wales and Northern Ireland to deliver financial education. Our network of trained consultants go into schools to deliver workshops directly for young people. Despite financial skills being crucial to people’s lives, there has been little historical culture of schools teaching them until recently. After years of campaigning from groups like ours, in 2014, financial education was put on the curriculum.

When the change was announced, many declared it “job done!”, pleased to see financial education finally recognised as something all young people should have access to.  But we were sceptical about what actual impact it would have. In itself, unless matched by a large input of resources and incentives for schools, it would be unlikely to change much in the classroom.

When it happened, we saw very little increase in demand from schools. Meanwhile, long standing complaints about insufficient time, resources and support leadership continued. Others in the sector, and interested politicians were beginning to notice this too, but we wanted more than just anecdote. So last year, we surveyed teachers to find out more about what the curriculum change meant on the ground.

What we found confirmed a lot of our fears. 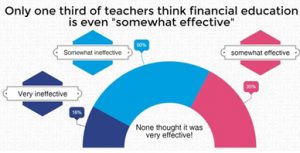 And while most schools we surveyed are delivering it, teachers are still very pessimistic about how good financial education is in England, with just under two thirds describing it as either somewhat or very ineffective, and none calling financial education very effective.

Surprisingly even to us, a third of teachers did not even know it had happened at all!

So why is the curriculum not being taught in schools? And what can we do about it?

The answers to the first question are stark. Words may have changed, but that didn’t make time in a busy timetable, provide any extra funding for stretched budgets or equip teachers with the expertise they need to deliver a subject that’s not easy for anyone. The paper obligation did nothing to remove these severe barriers to schools making sure young people receive the teaching they need.

Changing practice is clearly not as simple as writing it into

law, but it’s not that complicated either! Schools can and do change what they offer. But that can only happen if schools are given real incentives and help to make it happen.

This means either putting it in an examined subject or making sure Ofsted are looking for it when they inspect schools – and giving schools the resources they
need to deliver what is an entirely new subject for most teachers.

We’re hoping that, with pressure from groups like ours, this kind of real change can happen, but it hasn’t yet.

It’s not all doom and gloom. We, and our friends in the sector have provided financial education to hundreds of thousands of young people who simply wouldn’t have got it a decade ago. And there are some positive signs. PSHE is the most common home for financial education in schools, and the Governments’ recent proposal to make it compulsory could give schools an incentive to properly provide these vital life skills.

But the moral of the story is that it takes more than a parliamentary bill and a launch event to make change real in schools.